WHo ARe  the members of Medicine ball music band?

WHAT IS MEDICINE BALL MUSIC BAND?

The San Francisco Medicine Ball is an eclectic Bay Area ensemble featuring a revolving line-up of all star entertainers brought together from all over the world by founder and bandleader David Sturdevant. Known for his unique pairings of award winning multi-instrumentalists and first class vocalists, David delivers danceable Americana, Jazz and R&B hits nightly without ever losing touch with a band that started playing for tips on the streets of San Francisco, in Union Square and along Fisherman's Wharf. The Medicine Ball performs across the Bay and around the world, uniting audiences from all walks and interests with feel good music infused with the heart and soul of New Orleans.

The Medicine Ball is modular so adapting to venues grand and small serves them and their audiences well, allowing for a seamless transition from big stages, like the Guadalupe River Park & Gardens in San Jose to the more intimate, cool evening seaside restaurants, cafes and clubs of San Francisco, Berkeley, Oakland and Sausalito. Never one to get comfortable, eager to mix and match on the fly, David changes the lineup as often as the band crosses Bay Area bridges – one night it's the blazing saxes of Ylonda Nickell and Richard Howell with long time pal, trombonist and vocalist John Hunt. The next night David brings in vocalist and keyboardist extraordinaire Janice Maxie Reid, Blues Hall of Fame drummer/vocalist Larry Vann and Oakland's own Terrie Odabi. Always just one phone call away, David invites Grammy Award winning violinist Mads Tolling and singer/songwriter Crystal Monee Hall, Chelle Jacques and Valeriana Quevedo for dancing room only shows all over the bay. 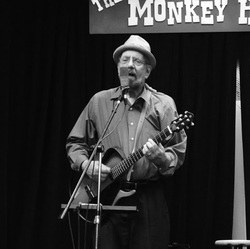 David Sturdevant is a long time musician with deep roots in the diverse arts and music communities of the Bay Area. With his eclectic ensemble band the Medicine Ball and audio/video production venture "DaVideo" serving artists, musicians and businesses all over Northern California, David's passion and hard work is celebrated for his tireless support of Bay Area businesses and local artists. David is the leader/founder of four Oakland based bands, the Italian-American group Trio Davide, the Swing duo Stafford & Sturdevant, Triage featuring multi Grammy Award winner Mads Tolling and of course the long running ensemble the Medicine Ball Band. He actively organizes performances with a vast network of musicians and venues from his home in Oakland. His bands are popular in cafes, nightclubs, festivals, schools, fundraisers and community events where he also draws from a diverse group of award winning instrumentalists and vocalists to perform with the bands. His music is eclectic and brimming with local flavors of Jazz, R&B, Swing, New Orleans Soul and Classic Rock. He has been the Music director at Oakland's Plymouth Church of Jazz & Justice for 24 years. David is also a videographer for Oakland Lyric Opera, Rhythmic Concepts, Oak Interfaith Gospel Choir and also an audio recordist. He is the principal musician and band leader for Stagebridge Senior Theater Company.
Powered by